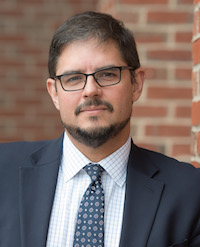 Attorney Angel J. Silvestrini, (A.J.) oversees litigation for the Law Offices of Zorrilla & Silvestrini, PA. He is one of a small percentage of attorneys that is admitted to practice law in multiple jurisdictions: Connecticut, Florida, Massachusetts, New York and Puerto Rico. He was born in San Juan, Puerto Rico and raised between California, Massachusetts and Puerto Rico. He has over 15 years of legal experience having practiced in multiple jurisdictions such as: Connecticut, California, Florida, Puerto Rico and in Massachusetts, and has appeared on national television as a legal expert.

As a volunteer, A.J. has worked with the Roxbury Innovation Center in Massachusetts, the University of Miami's The Launch Pad, Miami Dade College: Idea Center’s Impact Miami and TechStars Startup Weekend as a mentor helping founders mature their ideas into viable ventures and how and when to wind down their businesses. A.J. is also the director for the Boston chapter of Techquería, which is a national non-profit focused on LatinX advancement in technology.

A.J. and his family live in Newton, Massachusetts. In his spare time he enjoys playing tennis, hiking the White Mountains and coaching his kids in baseball, tennis and soccer.

He strives to bring personal attention, professionalism and genuine care to all his clients. He believes his role as a counselor and attorney is more than just a job. It is the building block of a personal relationship that is based on trust, which he takes very seriously.

Contact Us
Practice Areas
Client Reviews
★★★★★
I highly recommended Law office of Zorrilla and Silvestrini, they are always there for you. They help me in the most difficult moment. Excellent service and very professional team. I will always be grateful for everything they did for my and my family. Rosalynn R.
★★★★★
After having several bad experiences with different attorneys, from never having a call returned, to having the opposite outcome of what was promised, I was fortunate to find them. I had a stress free experience, having a positive outcome after being told by at least 3 attorneys (and paying for it) that I didn't have a case. I STRONGLY recommend them! Juanita R.
★★★★★
It is the first time in my life having a meeting with a lawyer to seek advice. Angel Silvestrini, Esq. made me feel at ease, was on time, very clear in his explanations and put my mind at ease. He pointed me in a direction and helped me find the compass. May God continue to bless him. Nadine S.
View More
Submit a Law Firm Client Review