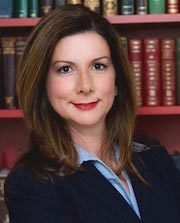 Rosalind J. Matos, is the firms business and litigation Of Counsel in Florida. She has over 18 years of experience representing clients in Florida state and federal courts at both trial and appellate levels. She is fully bilingual with a strong background in complex civil litigation, foreclosure defense and is now representing the firm’s clients in Bankruptcy court. She shares our commitment to outstanding client service as well as tough and fervent representation our client’s legal interests.

Her career in public interest law began as the South Florida Staff Counsel for the American Civil Liberties Union of Florida in Miami where she spent almost eight years working in a wide range of civil liberties areas including police misconduct, racial profiling, privacy rights, freedom of speech, student rights, freedom of religion/separation of church and state, among others. At the ACLU, she successfully litigated federal cases raising civil liberties and civil rights issues; evaluated the constitutionality of pending legislation; testified before legislative committees (state and local); worked with advocates and legislative staff to promote civil liberty interests, including lobbying government officials and drafting proposed legislation. She was a member of the Miami-Dade Racial Profiling Advisory Board and a lobbyist for the Civilian Investigative Panel (CIP), which is tasked with investigating complaints of police misconduct in Miami-Dade County. Moreover, Ms. Matos also served as a Spanish media spokesperson for the organization and participated in media interviews, TV and radio shows, debates, press conferences and public speaking engagements to discuss a variety of civil liberties issues.

After leaving the ACLU, Attorney Matos continued her career working with Legal Aid Service of Broward County in the Consumer Unit doing foreclosure defense work. She provided legal assistance to low income families facing foreclosure who did not have the resources to hire an attorney but wanted to save their homes. She successfully assisted homeowners in saving their homes through litigation and/or loan modification negotiation.

Most recently, Attorney Matos worked at well known South Florida law firm as an Associate Attorney in charge of the foreclosure department. There, she handled residential and commercial foreclosures and represented borrowers in all aspects of litigation from inception to conclusion.

With a background in Hospitality Management, Rosalind Matos understands the importance of building and maintaining strong and lasting relationships with clients.

Contact Us
Practice Areas
Client Reviews
★★★★★
I highly recommended Law office of Zorrilla and Silvestrini, they are always there for you. They help me in the most difficult moment. Excellent service and very professional team. I will always be grateful for everything they did for my and my family. Rosalynn R.
★★★★★
After having several bad experiences with different attorneys, from never having a call returned, to having the opposite outcome of what was promised, I was fortunate to find them. I had a stress free experience, having a positive outcome after being told by at least 3 attorneys (and paying for it) that I didn't have a case. I STRONGLY recommend them! Juanita R.
★★★★★
It is the first time in my life having a meeting with a lawyer to seek advice. Angel Silvestrini, Esq. made me feel at ease, was on time, very clear in his explanations and put my mind at ease. He pointed me in a direction and helped me find the compass. May God continue to bless him. Nadine S.
View More
Submit a Law Firm Client Review